If you ask the Farmer, he would tell you that I was really really nice to him last week while he was in bed, immobile, strung out on six Percocet a day. I made him pies, and French toast, and meat at every meal because there is no amount of Percocet that would make him not want to eat meat.

I watched gunslinger movies with him when he was groggy and I made sure to talk only about innocuous topics like the state of world politics, something that we’d never fight about.

I can’t tell you everything went smoothly. I forgot to let the chickens out a few days. I lost the new bag of Cat Chow and served ground beef for two days of heaven on earth for the cats. And, there were a few times the goats got into the house. But we figured out how to handle everything. Until the Farmer felt better: His back didn’t hurt so he wanted to work. So, he just stopped taking the Percocet. Cold turkey. And because we live in the country, the doctor gave the Farmer sixty Percocet pills with no instructions for how to go off narcotics.

For those of you who know nothing about Percocet, first of all, if you ever get that many pills prescribed, sell them on the streets of New York City to fund your child’s education. That’s how hard they are to come by.

And there’s a reason: They are highly addictive. I’m linking to some stuff about getting off high dosages of Percocet, but I’m summarizing: You can’t go cold turkey. You have to go slowly or you make yourself crazy.

So the Farmer was crazy and I had to have a drug intervention to tell him he was a total jerk and having withdrawal and he couldn’t tell and he needed to do it more systematically.

I convinced him. But he is not a guy who lays in bed all day. And he had already done it for five days. He wanted to work. On Percocet. I told him we agreed no machinery on Percocet. He told me how it’s not fair that I want him to taper and I want him to not work.

Then we have a screaming match about how life is not fair. That is the first topic. Which slides into:

The Farmer: No you’re screaming at me—

I told you I don’t like you being mean.

This did not happen. I mean it did. It has happened so many times that it’s like the bass beat in the background of our everyday life.

So we did that and then he told me he had to work. It was a work emergency.

Here’s what he said: “I have to check cows.”

You might think I know nothing about farming, but I have actually learned a lot precisely for figuring out if the Farmer is BSing me or not.

Me: Your dad can check them.

The Farmer: I don’t want to call him. It’s a masculinity thing.

I swear to God. He said this.

Then he told me he had to be off Percocet on Monday because he’s shipping hogs and cattle.

This is farmer-speak for putting them in a truck and sending them to the butcher to be killed.

I tell him he can taper off the Percocet like he is supposed to, and his parents can ship pigs and cows.

Then we have a huge fight. About what really needs to happen: how his parents don’t need him to ship the cows and pigs.

He says he wants to be in charge of it.

I tell him he’s 40 and he’s too old to show up at work just to make sure people know he’s in charge.

So he has to tell me that I make his life hell.

Now that I’ve been with him three years, I know this is his way of telling me he doesn’t want to talk.

When I tell you what I did next, you will think I’m a bitch. But so what? I’m going to tell you anyway. I told him he had to talk to me all day. I told him I was going to follow him around the farm nonstop, how I would even drive off-road to check the cows in the forest.

“It’s past my comfort zone.”

“Talking to me for one second is past your comfort zone.”

We are talking. He wants to wander… past the corn…past the hay…through the vegetable garden…

We talk about nothing. I bitch to him about how he’s dishonest to himself about the farm, and he says things like, “Okay, you win. I’m not as honest as you.” Or, “You’re right, I’m never going to be able to make you happy.”

These are ways to avoid having to have a conversation with me, so I don’t relent. I know he’s exhausted from talking, but look, you have to trust me on this that he has to talk for two hours before he actually says anything besides how he would rather be single than have a hard conversation.

I tell him that the real reason he’s trying to kick the Percocet so fast is because he’s scared his parents don’t need him. He wants to be needed.

Then I tell him, “Look, your parents just wrote you out of their will. They obviously don’t think they need you.”

This hits hard. Though not as hard as it’s hitting you now, when you read it, because I’ve said this to the Farmer a lot of times. Ever since the parents wrote him out of the will.

The next part of the conversation is deleted. I had to—the Farmer was too upset. But here is some background material so you can follow along.

As you know, from my Thanksgiving Drama post, the Farmer has three sisters, all of whom have kids. I am not allowed to tell you who the Farmer’s parents are giving the farm to. We have to keep that a secret. You might know from the post about why I do not do family secrets that keeping another family secret is eventually going to make me physically ill. I am positive that keeping family secrets only serves to protect people who treat family members like shit.

(That is the end of the deleted, secret part. The good news about me having to write about the deletion is that I got to link to two of the most popular posts on the blog. Maybe you missed them. They are good to read.)

So, suffice it to say that the farmer asked his parents why they aren’t leaving any of the land to his children, and his parents said that they are not his real children.

I think the farmer is devastated and he needs to stop farming with them because he’s devastated.

He tells me he is not devastated and he is happy farming with them.

I tell him he’s lying to himself and he’s taking it out on me, like when he tells me I am unreasonable about Percocet and he has to ship hogs. It’s really not that I’m reasonable but that he’s scared to miss a day of shipping hogs and won’t admit it.

I don’t care specifically about the farm. I mean, I didn’t grow up expecting I’d have farm land. But I do care about feeling like the Farmer is losing his self-respect over this and taking it out on me.

Okay. So I refuse to let the Farmer stop talking.

He says he’ll talk if we can go somewhere comfortable.

We can’t go in the house. My ex is there with the kids. We do our best fighting when my ex is distracting the kids.

The Farmer wants to go to the pig building. The pig building: I tried to get him to throw out his gross furniture that he had had since college and he couldn’t do it, so he put it in the pig building.

Now he wants to sit on his sofa. There are two. I sit across from him. 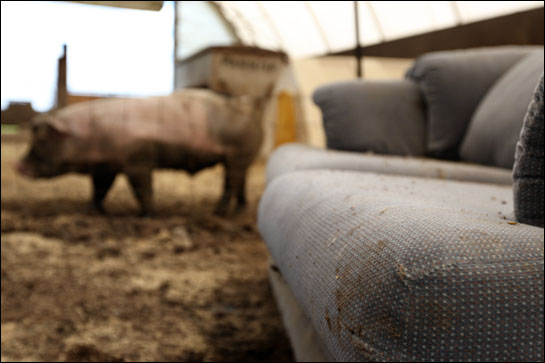 He has nothing to say, of course. This is how a Farmer talks to his wife. By saying nothing. So I look around. My son’s 4H pig project pigs are in the building, so by pig farm standards, the place is clean.

Where we are sitting looks kind of like an island in the middle of pig blood, but the Farmer told me it’s really just muddy water. The Farmer says, “What do you think of the pigs?”

I tell him that does not count as conversation.

I tell him I’m going to last a lot longer on the sofa than he is because I can sit still and he can’t. I take off my boots and sort of make myself comfortable, like it’s the living room.

Finally he tells me he wants to transition to a smaller farm operation, on just the 125 acres he owns outright. But he’s scared. He doesn’t know for sure how to do it. He’s making a plan.

Then we are talking. I tell him I’d be scared, too. I tell him I know he’s built up a great business and it’s hard to walk away.

I am not one with extra empathy, but I have plenty for career changes. And I think that’s what he’s really going through. He’s worked on the same farm for 40 years, and now he has to switch. He has to make operations work on his own farm, he has to figure out all new animal and crop logistics and all new cash flow planning, and it is scary.

I think about the article in Fortune magazine this week titled, “Reinvent Your Career.” about who can succeed in changing careers. Fortune reports that the people who can do it “are all people who love learning by doing. They are not victims. At a time when many people react passively to career bumps, reinventors took control.”

I know the Farmer can succeed. He can be like the reinventors profiled in Fortune magazine. But I know that after two hours of pressing him, the most he can possibly say is that he’s really disappointed by his parents’ choices and he’s scared about farming on his own. It’s huge for him to say that.

We leave. But not before we have make-up sex in the pig barn.

Keys to getting unlost My accidental vacation
Scroll to top