First of all, here is a photo of rhubarb cobbler. And this is my food blog post for all of yeterday’s commenters who think I would not be a good food blogger. You will love this post: it's about what to do if you think you're about to be fired.

1. Be really interesting. And fun. It's a lethal combination.
This photo looks disgusting, because that is the truth about food. Most of it looks disgusting. Even stuff that tastes good looks disgusting in a photo. It's like sex. If you have a cinematographer and three lighting guys and a foley artist who comes in at the end, then the sex looks great. But if you take a picture of yourself having sex, forget it. You look like gross, retarded animals.

So even good food looks disgusting. But this photo is not actually an example of that, because this rhubarb cobbler tasted disgusting as well. Too much flour, I think. Although Melissa kept saying it had too much butter. Maybe too much flour and butter and it needed more rhubarb.

The thing is that Melissa made the rhubarb cobbler. She has cooked exactly three times in the five weeks or so she has lived here. But I liked that she cooked. Cooking is so nice. It's just a generous and vulnerable thing to do for the person who is eating. So I didn’t care if she did a good job or not. I just liked that she tried.

This reminds me of the research about how people who are incompetent but likable almost never get fired. I mean, Melissa refuses to work on my goat cheese startup, and she seems to have lost my books in China (please, do not ask in the comments when my book is coming. It's coming) and she spends so much time obsessed with Cullen that it's like she has only half a brain when she's with me, but still, I like her so much. So I accept her rhubarb cobbler as an adequate attempt at doing valuable work.

2. Don't worry about who gets credit and who gets blamed. It's boorish to care.
We have tons of rhubarb in the garden, left from the people who owned the house before the farmer. The rhubarb is huge and all last year, while the farmer and I were fighting about that I could not get the bathroom tile installed so we were bathing by running up and down the Slip ‘n’ Slide Double Wave Rider, all last year people would come to the farm and say how could I let the rhubarb go unused. It is such good rhubarb.

So this year I've been diligent about pulling off flowers before they flower so the rhubarb lasts, and I give handfuls of it to everyone who comes by, because in the country everyone knows how to make rhubarb pie.

I made rhubarb pie.

I said, “Melissa. Take a picture of my pie. I need a picture.”

She said, “No. You'll write that my rhubarb cobbler sucked and your pie was great.

I saw her spending a lot of time on the picture. I had high hopes.

Here's what she took: 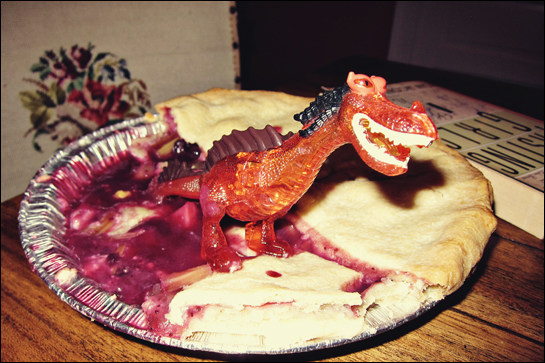 The pie was good. But, honestly, I sort of cheated. I got a crust from Trader Joe's. I love this brand. And it comes in pieces so it's hard to put together and I get to squeeze the edges so my finger prints are on the pie and I think people like that. Also, I mess around with the insides. Rhubarb is a flexible pie inside. I just need some sugary sticky stuff inside. So I put pie filling sometimes. Like, the paste of the canned blueberry filling, or strawberry applesauce. I buy the Whole Foods kind because expensive ingredients make you look like a good cook. (Remember this when I charge you and arm and a leg for humane goat cheese.)

Is it cheating, though, that people give me credit for being a good cook? I don't hide that I'm taking ingredients that are not from scratch. But really, don't tell me you make your pies from scratch. Do you harvest the wheat? I do. Well, I'm going to bale hay this summer. So it's sort of harvesting wheat. But I don't get credit for scratch, so neither do you.

So I say nothing about the pie. I do not fret about whether I should get credit or not, thanking the Farmer when he is effusive about each randomly mixed rhubarb non-recipe for pie I make. Well, I do fret, but I tell myself not to. It's so easy for me not to care about this stuff at work, and so much harder when it comes to food. But I think it's just because I'm new to cooking.

3. Prepare a speech.
I had to go to Madison to get food for dinner. We go there for cello. Who drives four hours round trip for a cello lesson for a five-year-old? Only a farm family, I think. Or an insane overachieving Westchester family, maybe. Both family types are insanely protective of the lifestyle they are determined to have.

On the way home, my neighbor Kathy called to see why I wasn't at home when she walked over to say hi. I tell her to wait—to just walk in and open a bottle of wine and we'll be there soon.

Kathy is upset because she thinks she's getting fired tomorrow.

Melissa and I ask her, “Why do you care? We've been fired a million times.”

Kathy tells us it's different in a small town.

I tell Melissa to take Kathy out to the field to collect nettles. It will cheer her up.

Kathy grew up on a farm. She is not going for the nettles. “Nettles?!?! Like, the weed? You eat those?”

I tell her the Farmer is obsessed with his book about how to forage for food. I do not tell her he is trying to teach himself to live off the weeds on his farm. I have empathy for Kathy. On my first date with the Farmer he served me dandelion leaves for salad. I thought he was too poor to buy real food, so I ate them all, to be respectful.

I explain to Melissa that Kathy will not be consoled with nettles.

They watch me cook.

I tell Kathy getting fired just means it was a bad match. She'll find something better to do.

Although I am not sure what else there is to do in Darlington besides work on a farm or in the school. But there must be something. Or if there isn't, there must be a big grant for creating Internet startup jobs in rural towns.

We eat rhubarb salad. It's not bad with canned mandarin oranges.

Melissa tells stories of getting fired like Vietnam vets tell stories about Phnom Penh. It's a lot of death with a sort-of-inappropriately cavalier tone.

Melissa tells Kathy to wait for the words, “You're fired.” And then, no matter what words lead up to that phrase, say, “I'm sorry you feel that way. Thank you for everything you've done for me.”

Then Melissa tells Kathy to just be quiet. The silence will be unnerving to the person firing her.

Melissa tells Kathy that also, sometimes you lose your hearing when you're fired. It's true. I can't believe Melissa remembers this detail. I've been fired 20 times and I didn't remember.

Then Melissa writes a script for how to act when you're fired for Kathy to memorize. If the first book we published hadn’t gone missing, I would suggest to Melissa that she turn her advice into a book.

We eat some leftover rhubarb pie for desert.

How to date your co-worker This is the new, reliable me
Scroll to top