Melissa sits in my garden with me and talks. She likes to talk to me in my garden because she says it’s the only time I don’t interrupt her. In the garden Melissa narrates her Facebook activity like it’s a horse race. And she takes pictures of the farm all day long and posts them to Facebook.

Her Facebook friends tell her she is really lucky to be living on a farm. An old friend of hers that is really not her friend but her ex-boyfriend’s friend, says, “You’re so lucky. I wish I were on a farm right now.”

Melissa tells me he is a designer who can write code and he wants to live on the farm.

She tells him, “You can come live here. Penelope needs a designer. Can you redesign her blog?”

He says yes. Melissa gives him one of the ten thousand free tickets she has from living in Hong Kong and Milan with jet-set millionaires who foot the bill for everything.

I get giddy. I start making notes about my love for the Pioneer Woman’s layout.

Melissa is giddy because she suddenly remembers that this guy is cute.

“Cullen. You already have a Wisconsin accent.”

Cullen arrives from Austin the next day. He says he was going to move out of his apartment anyway. So he spent the next 10 hours packing and moving all his stuff to storage.

My sons love him right away. 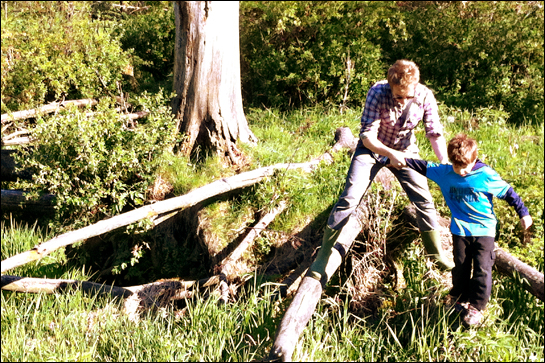 So does Melissa. The flirting between them is so obvious that the Farmer starts making jokes. We have never seen Melissa so charming.

Also, I tell Melissa I need photos of Cullen for the blog, and she sends me a series of swooning pictures of Cullen on the farm. I tell her, “Are you kidding me? My blog is not Tiger Beat.”

I make our porch into a bedroom for Cullen. This seems okay because he is spending only a few weeks here redesigning my blog.

Melissa sets up a big desk for Cullen’s computer and screen. In her bedroom. “It just fits better here,” she says, appealing to the interior decorator in me.

Melissa tells Cullen he can put all his stuff in her room because there’s so much more storage there than on the porch, where he’s sleeping.

Melissa and I spent weeks creating a sort of still-life-of-Melissa in her bedroom. I can’t decide if I think Cullen is a sweet addition or an unexpected eyesore. That was the first two days of Cullen.

The third day, I started worrying that maybe the porch is sort of yucky. But still, I was surprised to see Cullen in Melissa’s bed. 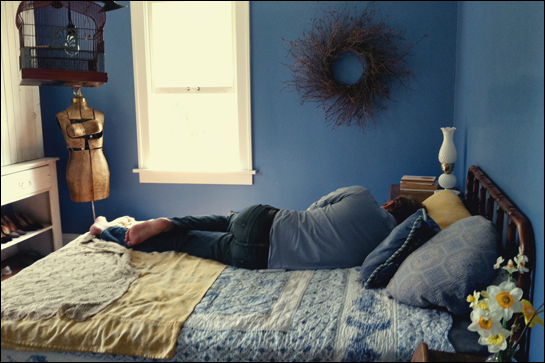 Do you notice how he matched? It was ominous. So the Farmer laid down house rules to Melissa. “No sleeping in the same bed because our kids know you guys just met. They can’t see you guys in bed together.”

Actually, he made the house rules but I was who told her. It felt ridiculous. But not as ridiculous as it would have been to explain to the kids why Melissa is in bed with the guy who just showed up at our house two days ago.

Then, the next day, Melissa is in bed with Cullen. Sort of just sleeping there like, maybe, if there were one bed left in the whole world, sleeping how I would, next to one of my brothers. But still. It broke the new house rule.

So we had to have a summit meeting. The four of us. The farmer explained that we can’t have the kids exposed to confusing sexual relationships in their own house. “I don’t want to ever see or hear you guys having sex in the house.”

That was nice, I thought. He left things sort of open-ended for in the barn, the hayfield, and other places that might be romantic to two twentysomethings who don’t actually have their own home.

Okay. Fast forward. Melissa is gone all the time, fawning over Cullen. Cullen is not doing anything on my blog because he has Melissa—a full-time job—and he has a full-time job at this startup Daily Dot, which, maybe I am officially launching, since I don’t think they have announced yet. But anyway the editor-in-chief is Owen Thomas who is one of my favorite bloggers. So I keep thinking, Owen is working with Cullen so I want to be working with Cullen too. Actually, I want to be working with Owen and Cullen. I want everyone to be working on my new blog design. I have a lot of ideas. Like, I could do a cooking blog where I write about bulimia. No one does that. I think Owen would be a great editor. Melissa could take photos of stuff to throw up.

But there is no one around. Everyone is busy doing Daily Dot and dating on the farm.

It’s asparagus time on the farm. On the farm, you eat whatever is in season until it is gone. You get sick of it before it’s gone, but you try to remember that as soon as it’s gone, you’ll miss it.

We eat asparagus every day and it’s so fun to pick it and cook it, but it’s not fun to serve it to Cullen and Melissa when I feel like I’m running a B&B.

So I tell them that we need to talk. “I am not getting a good deal here. Melissa is not being a good friend because she is falling in love and when you fall in love it’s like you’re losing your mind (literally) and I feel like, at best, I have an insane friend .”

So I don’t have a friend and I don’t have a guy working on my blog and I have these two people who don’t cook or clean. Not that I’d want them to. Wait, I’m so excited to tell you this—Melissa is a member of the incompetent elite. A commenter said this about her after an earlier post, and we have adopted the term for her. So, Melissa is part of the incompetent elite and cannot cook or clean.

Cullen says he will start working on my blog.

I say, “Okay. Then I can pretend Melissa is your fun girlfriend you brought along to the farm when you came here to work on my blog.”

“So, you guys are boyfriend and girlfriend now. I don’t have patience for the slow pace of courtship.”

They look at each other. They say okay. They laugh.

Then I say, “You have to sleep in the same bedroom. I can’t have the kids seeing you sleeping separately and then see you sleeping together. So Cullen, just move into Melissa’s room.”

They look at each other.

I say, “Sorry to be bossy. But I have to look out for the kids.”

They look nervous. I tell them, “Wait here. I’ll get you a bottle of wine to celebrate.”