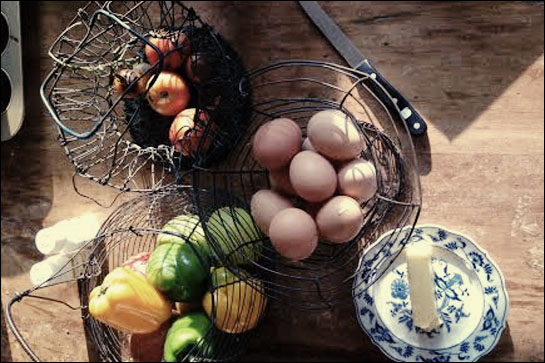 I check the farmer’s blog obsessively for any updates, which takes a lot of energy partially because he never writes on it but mostly because I have to work really hard at all the mental gymnastics I use to justify to myself what I’m even doing on there in the first place.

But now I know. I was looking for evidence that he thinks about me as much as I think about him. I wonder all the time—does he miss me when he’s sorting pigs for market? I did that with him. And I miss doing that with him.

Maybe that’s asking for too much, because I was always letting a slightly-too-small pig get through the gate. But what about living inside the blue and red and yellow walls? The colors I picked to paint inside the house are so cozy. Do they make him think of me?

The answer is no. Because he got married in December. I’ve watched the video 50 times. His family is so, so happy in the video. They were never that happy around me.

The farmer is happy, too. Happier in the video than I’ve ever seen him. Maybe it’s that he’s getting to be the center of attention—he loves that.

Maybe you’re thinking that he could never be the center of attention with me around. But, actually, being the center of attention is hard for me. Which is why I hid at my first wedding and then there were only five people at my second wedding. I’m generally happy to go along with whatever someone else wants. That’s why dating him was so easy.

But once we were together it became clear that my kids are the center of my attention. His family is like most farm families—all the attention goes to the land. I don’t think he could have ever imagined how much time, energy, and resources I’d give to my kids.

The farmer was honest from the start that he loved the land more than he loved me. People told me that’s how farmers are and I loved him, so I thought it was OK.

Until I saw this video, I didn’t realize that maybe he was excited to be with me because he had never been loved more than the land. But I loved my kids more than I loved him. So he was still second.

The woman he married seems nice—I think I can tell that from the video. So I am not surprised that he’s so happy. I am surprised that he crawled under her dress and pulled her garter down with his teeth.

To say I would never do that is the only way I can think to talk about it. Because the only thing that matters is that he loved doing it. He did a victory dance afterwards, garter in mouth, fists pumping in the air. And she is laughing with joy.

I don’t think I will be reading the farmer’s blog anymore. I think I was reading it to try to understand who I am now and how I got here. Because there is no way to get where I want to be if I can’t tell the story about where I’ve been.

People tell me I don’t charge enough to rewrite resumes. I used to worry those people were right, but now I don’t.

I charge less than most people to rewrite a resume because it’s a privilege to help someone find the story of where they’ve been. The story you tell about your past determines where you can go in the future. If you never get a story that feels right to you, you get stuck there—this is just as true in your professional life as it is in your personal life. Stories are what we use to make sense of our world. And every time I help someone rewrite theirs I’m practicing for the next time I’ll need to rewrite my own.