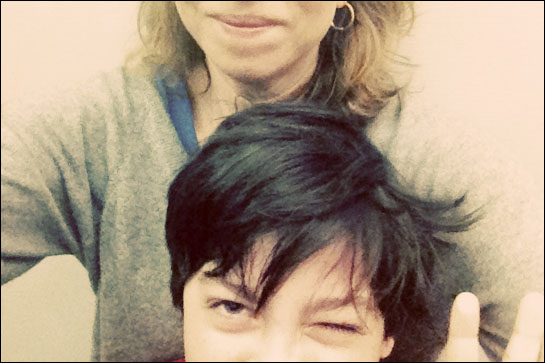 I’m going to ignore the fact that the DSM no longer includes Asperger’s as a diagnosis. Asperger’s remains a useful way to categorize people with very low social skills and very high IQ — and a high rate of manic-depression and suicide. It’s useful to separate out these people in order to help them. It’s like separating out people who have a gene for breast cancer. There are things you can do to make their lives better.

My son and I have Asperger’s so I am constantly thinking of how to help both of us better fit into the world. Here are three things that stand out to me.

1. To get along with someone who has Asperger’s, look closely at that annoying car.

You know when you’re on the highway and everybody moves along like a ballet – merging, exiting, changing lanes. There’s moving over for a truck. There’s moving away if you’re blocking someone who wants to go faster than you. There are all kinds of unwritten rules we adhere to in order to not run each other over.

The Asperger car is the one on cruise control at exactly the speed limit. Technically, that’s what everyone is supposed to do, but there are a million scenarios where if you refuse to slow down or speed up, you actually make everyone else’s life hell.

But there’s no way to tell that annoying car, “Hey, you’re breaking the law,” (because they’re not) and you can’t tell them, “Hey, you’re being inconsiderate,” (because they’ll say, “Well, that merging car could have slowed down until I got by.”) You can’t tell that car, “Hey, there are some unwritten rules you’re not paying attention to.” (They’ll say like what? And then they will argue.)

2. People with Asperger’s don’t have friends.

Someone with Asperger’s doesn’t feel a huge need to connect on an emotional level with lots of different people. They might think they are connecting emotionally. But it’s not how other people do it.

People with Asperger’s want one friend. The problem is that in adult life your one friend has to be your spouse. So if you know you have Asperger’s you need to focus carefully on finding a spouse. Theoretically, this should be easy because high IQ and good looks go hand in hand, and the definition of Asperger’s includes higher IQ.

It’s overwhelming to be close to people. A lot of people with Asperger’s who are married sleep in separate beds or have sex with minimal physical contact but you need to find the thing that’s going to work for you so you can have that one intimate relationship. Otherwise, you’ll get older and realize everyone is paired off and there’s no room for you to have your best friend, because adult life best friends are spouses.

3. Asperger’s is actually a workplace issue.

If you have a high IQ and low social skills it means you’re generally right and you generally don’t notice when you’re wrong. So life is pretty good, not for the people around you, but for you, if you can just go with that.

The problem is people need to be connected in the world to feel useful. It’s no fun to be right about everything if you can’t also be useful about what you’re right about. So people with Asperger’s need jobs, and people with poor social skills get fired.

There are a few ways to think about getting a job. One is that a job can be a break from the overly sensory aspects of the world. You can get a job where everything is the same. Your job is repetitive, nobody bothers you and the office is quiet. For some people this type of job would make them kill themselves. For someone with Asperger’s this job is like a vacation. Think DMV, court reporting, librarian, or even retail.

I spent most of my 20s doing retail, and though I didn’t know I had Asperger’s, I knew I adored my job. I had the books in every section of the bookstore memorized. I knew every publisher of every book. I loved the monotony of shelving books alphabetically day after day. Even the customer contact was lovely. They would only ask me questions about my narrow bookstore topics or sometimes ask for change. This is the type of job that is perfect for someone with Asperger’s.

The reason we stop doing these jobs is because we’re ashamed of having such a high IQ and enjoy doing jobs that don’t require high IQ. So part of getting along in the world with Asperger’s is accepting that not everybody has to have a high IQ job just because they have a high IQ.

The other thing you can do with work if you have Asperger’s is specialize. People with Asperger’s are obsessive. If you can find a way to get paid for what your obsession is, then your employability is secure even though your social skills are not.

Don’t kid yourself that typical Asperger’s specialties are useful. Memorizing air travel minutia, train schedules, military formation, Pokemon decks: You cannot monetize these fetishes. Memorize stuff other people with Asperger’s are unlikely to gravitate to, like the characteristics of Generation Y. Then people respect your work.

Really, I have a feeling that what gave me the ability to bridge from a quirky writer to a marketable writer was focusing obsessively on Generation Y. Nobody could memorize the facts as fast as I did, and because they were all in my head I could synthesize them faster than everybody else and come up with trends. It gave me a key advantage in my career that separated me from the typical career paths of unemployable people with Asperger’s.

Do you have the guts to live a life that sings?
Scroll to top