Ten years ago, when I was pitching my book to publishers, one publisher leaned back in his chair and said, “I don’t get it, she’s never worked in Human Resources, she’s not part of Generation Y, and we can’t even figure out what her career is. So how is she qualified to give career advice to young people?”

I got sweaty. I had pretty much run out of money, and I had spent my last dollar on getting clothes that would hide that I was pregnant. Every time I thought about this book deal falling through, I felt sick.

My agent said, “She is great at seeing trends. She sees trends before everyone else. Generation Y is going to be huge in the workplace. Alternative careers are going to be huge. She is the only person talking about it. She is a franchise. She will be writing books about trendspotting for the rest of her life.”

I could have hugged my agent. I had never thought of myself the way she described me. I mostly just thought of myself as someone who couldn’t even handle playing on the professional beach volleyball tour for more than a year.

So, with my agent’s endorsement (sort of—I think she has fired me because of my insolence when it comes to not following publishing industry conventions) I present my three favorite trends of this year:

1. Cheating on your company will be okay. Companies will allow employees to do start-ups while they are full-time as a way of keeping top talent. Right now entrepreneurship is totally hot. A lot of people quit their job so they can do a start-up. Microsoft has officially allowed people to do a start-up while they work full-time. Other companies will follow.

2. Thieves will have to change tactics as people will leverage social media to track down and punish thieves. This is actually already happening. Check out this guy who snapped photos of someone using his stolen Macbook via his stolen Macbook. But the trend will become so big that people will have to resort to new tactics of thievery to avoid the public embarrassment of social media.

3. We will live in an era of eccentric collections. A few trends are converging right now. First, materialism is not cool. Gen X hates it, but also, post-crash America has revealed a new, credit-weary consumer. Second, content curation is a huge online right now — companies launching products that help people make sense of too much stuff. The convergence of these two situations will be that people shift their natural, human tendency to collect from the physical world to the virtual world, which means what we collect will expand.

Paul Hassing is a guy who sends me great links about collections. He’s the person who first told me about Pinterest, and he sent me a link to The Puddle Blog, which is a great collection of puddles.

I like that I got to spot three trends in one post. I notice this stuff and it starts burning in my head until I have the chance to tell someone. I can’t tell if I’m on target until I start telling someone. An audience makes a difference. Are you wondering if you have trends in your head that you’re right about?

How do you know if you’re working hard enough at it? Melissa is great at spotting trends for social media and for fashion (two areas I’m not good at). She is pretty difficult to work with, but she gets hired by random people to do random stuff, like tell them what social media tools will be best for attracting renters in rural areas in the next three years. Are you wondering what Melissa does with her days? She reads. She mostly reads off her iPhone, which she sleeps with. She reads so much that she has to have a stack of magazines wherever she is. Just in case. Here is what she was doing two hours ago: 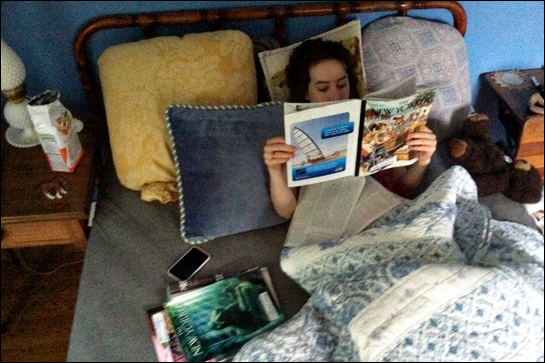 Do you know what she’s doing right now? She’s thinking. She is staring at the wall. Probably processing all the stuff in her head. This is what most trendspotters do: look, listen, process. Of course other trendspotters get paid for doing it, but Melissa illustrates the point that it might be something you’re born with—the ability to spot trends. Because that kind of stuff that you’re born with is the stuff you do whether you are paid or not. (Would-be novelists please take note.)

I was talking to Tyler Cowen last year. Or the year before. Whenever it was that his book, Create Your Own Economy, came out. Before Business Week named him the world’s hottest economist, which, of course, makes me feel hot because I have spoken with the hottest economist in the world.

In fact, I have argued with him. Tyler was telling me that happiness is not that important to people—that some people just find pleasure in consuming information and ideas and they don’t need the trappings of happiness. First I told him he was crazy and maybe a sociopath and then I stole his idea and made it my own in my wildly popular post which I never acknowledged as perhaps a little bit stolen: Is your life happy or interesting? Anyway, Tyler is great at spotting trends, which makes him the world’s most interesting (is that what famous means?) economist and also a totally fun blogger. (Here’s his blog.)

Bottom line: you can bet that if you do not process information as a way to feel like you are alive, then you are probably not a trend spotter.

How do you know if you’re on to something? Remember that picture at the top of the post? Did you know what it was for? If you’ve had a baby, the answer is yes. The idea of a parent rocking next to a sleeping baby is so incredibly obvious that it’s amazing this chair has not been invented before. Parents get sick of holding a baby. You do not know this until you’ve had a baby of your own. So the chair is an absolute yes. It’s got great craftsmanship and it’s a great idea. Everyone will say yes to this chair. (And then people will say, how much? )

The way you know if you’re right or not is that you hear peoples’ reactions. Good ideas get two reactions:

One reaction is like when the proverbial light bulb goes on when the person hears or sees the idea. The idea is so on-target that it’s a pleasurable moment for the person who sees a piece in the jigsaw puzzle of life fitting into place.

The other reaction you can get to a good idea is shock: This is terrible, awful, upsetting, offensive. You know you’re on target with that reaction as well. Because you think it might be right, but it’s so counter-intuitive that people cannot see it’s right because they would have to switch their world view. I experienced this when I started saying that women should not report sexual harassment.

How do you know if what you’re saying is not new? You see confirmation that you’re right. It’s the kind of confirmation where you can tell for sure that the world agrees with you and you are right smack dab in the middle of a trend. Because if you’re right there with everyone else, then you’re not doing anything new.

I had that feeling when I looked at the New Yorker cover a few weeks ago. Just when I was settling into the idea of me being a city girl with a farmer’s wife life, I see that I’m a Park Slope cliche: Are you really doing your job?How to spot a cheater
Scroll to top