Melissa is back. She stole my purse.

But first, before she stole my purse, she opened my mail.

I walked into the kitchen and I said, “Hey, you opened my mail.”

“What's this? What's this opened envelope that is addressed to me?”

“Oh. That? I didn't think you counted that as mail.”

“What does it count as?”

“I knew it was from an author. I could just tell from the expensive stationary. So I thought it was like getting a book in the mail from a publisher. And you told me I could open those if I was looking for something to read.”

It turns out he wrote a thank you note to me for mentioning his book on my blog. No kidding. That made me so happy that I forgot to tell Melissa she can never, in the rest of the history of her life, open any mail addressed to me.

It made me so happy that I talked about his book because you know what? I get like ten billion product pitches a day and there has to be some system for figuring out what I'll write about. So I try to just write about stuff that will make people happy.

Of course, I have to like the stuff too. But look, take this water: Hint. They sent me a press release saying that they are the game-changer in flavored water. At first I hit delete. But then I thought, well, my kids like flavored water and they are drinking way too much sugary stuff because I won't let them drink our tap water because I don't trust anyone out here who is testing water for nitrates. Because if the nitrates are too high then we would have to report our dairy-farming neighbors to the Department of Natural Resources. So I think people in our county ignore bad water.

We just spent a week in Steven's Point, WI (at cello camp, again) and I was excited that we were in a city (yes, a town of 25,000 is big excitement for us now) and my son could drink the water. But I took a sip and it tasted so weird that I stuck with bottled water. And now, it turns out, that Melissa, who spends most of her time here researching insane topics, comes up with this link that says Steven's Point is the only place in America that has better tasting water than New York City.

So this is all to say that I'm losing my ability to discern good water, so I had the inspiration to tell Hint that I'd write about them if they sent me samples. They sent ten bottles and we drank them all in a day.

So look, the water Hint makes is good. But it's not like Hint is now going to be a successful company because I wrote about them. Anyway, they are already distributed in Whole Foods. How big of an impact could I have?

I'm telling you this to tell you how to pitch a blogger: Show the blogger how he or she can make a difference.

Look, if a blog has decent-sized traffic, it's because the blogger is absolutely nuts about creating a fun, interesting experience for the community. It's pretty much insane to do the work it takes to have a huge blog. The blog is like a monster that always needs feeding or it becomes mean. There are no vacations and there is no sure way to keep things from going south. It's largely a labor of love.

So I don't want to spend time on my blog plugging products that are not going to somehow help me or the readers. A lot of PR types know this, which is why they send me offers like I can give you guys a 10% discount on someone's insanely stupid webinar. Like that's going to help anyone in life.

I want to tell you one of the best pitches I've gotten in a while, though. It was from someone who is a regular reader of my blog, and she showed that in her email with little mentions of my pet peeves.

And then she told me, in a get-to-the-point-quick way, that she has been executing on a business plan and she has a model that is fundable, but she needs traction right now to show that if she expanded her line she could sell more purses.

So I said sure. Send me a purse.

The purse came in amazing packaging and I told Melissa to take photos of it so we could copy it for our next book. Like, maybe the book could arrive in a nice box or something. 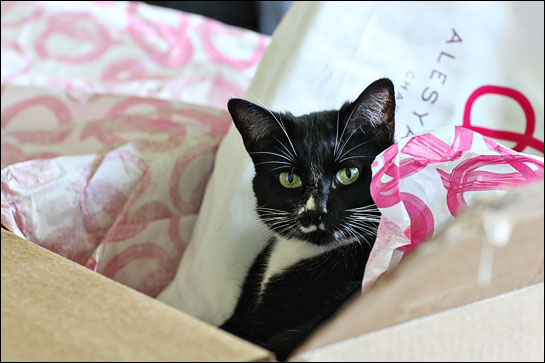 But then we realized that this packaging is way too expensive. The book would have to be $200. Which is pretty much what the purse costs.

Then I lost interest in the purse because I had to meet with the guy who I want to do my goat business with me but keeps refusing because he wants to be a millionaire now, not when the company sells.

As I'm going to the meeting, Melissa tells me that I have to use the new purse. It fits a laptop. Melissa packs up my laptop in the laptop spot and the phone in the phone spot and then I throw a fit that I can't find the phone because I didn't know I had a phone spot.

Then Melissa has me change all my clothes because she thinks I am retarded at dressing myself, which I think might be true, but she is retarded at interior design so I don't feel bad, but I feel mystified as to why can't I just think of my body as a room and then be better with my clothes. I go out to the car and the goats follow me, of course, because goats are like dogs but way more destructive.

As I leave, Melissa says, “The purse looks so good! It matches so well!” Then I come home, and by the time I am done sorting through my mail to see if Melissa has opened any, Melissa has dumped my stuff on the floor, and the purse is in her room.

And I think that's okay because Melissa loves the purse. And we will do something nice for Alesya. And so, too, maybe will a bunch of the readers, and then she'll get funding. And then, maybe, we'll do that again, with another company that pitches me.