Melissa left yesterday. She moved back to Austin. She moved for a job that I think is totally stupid, but her future employer reads this blog, so I have to watch what I say. On the other hand, she ended up giving references the same day I posted about me worrying about her having an affair with the Farmer, so the woman interviewing her decided not to use me as a reference.

I can see why she wouldn’t want to have to deal with me. But, if I am not a reliable reference then I’m probably also, in her eyes, not a reliable person for assessing whether the job that Melissa took is totally stupid for her to take. So maybe she is just ignoring my blog anyway. Or maybe she is printing out each post and putting it on she office wall and throwing darts at it.

The second-to-last day Melissa was here, we went berry picking. The farm is full of little pockets of wild blackberries. And we set out to pick enough for me to make a pie.

We sort of stick together, but it’s fun to search the sides of the hayfields til you find your own bush full of berries. We each took our own bucket and, did you ever read that book Blueberries for Sal? In the book, the little kid eats more berries than she puts in her bucket. It’s best to do that when you think no one’s looking. After a while, it starts to feel like you have picked everything. And you don’t want to go back where someone else has picked, but as you walk toward that place where they have already picked, invariably, you find plenty that they missed. The same variety of approach exists for career coaching as well. I, for one, have given bad career advice (like, for example, to my brother’s college roommate,) and most of the time that I’ve given bad career advice it’s been because I have a perspective that just doesn’t shift in that instance. For example, I have very little patience for people who won’t leave a terrible career because they need to earn six-figures.

So—back to Melissa. I have told her before that I think she is a phenomenal photographer. I think she should earn a living doing that. Melissa has a problem that is really, really common for people with Asperger Syndrome. She is almost always the smartest person in the room, but she can’t last in a job.

She is not alone. People think they would like to hire me, but really, I’m a nightmare. And really, at this point in my life, I don’t think I would try to do life without an assistant. I’m just not good enough at the day-to-day life that non-Asperger’s people find manageable. Like, going to the DMV, sitting through a long, loud dinner, or navigating an airport.

The issue here is executive function. People with Asperger’s have terrible executive function. We cannot stay focused on the thing that is most important. We are easily distracted by what is most interesting. This is a low-level problem for everyone. But for someone with Asperger’s it means forgetting to respond to someone who says, “Hi, how are you?” or, literally, burning down the house.

You won’t believe what I am about to tell you. Melissa’s new job is an executive assistant. I asked her, “What? How can someone with terrible executive function take a job with the word executive in it?”

We have this fight all the time. I think she should work at Forever 21, which is her favorite store, and do photography on the side. Today, retail is a totally respectable career path, and the trend to do a day job while you get the real job up and running is so mainstream that Jon Acuff just published a book called Quitter: Closing the Gap Between Your Day Job and Your Dream Job.

Melissa does not want to work at Forever 21. She is making way more money at the job which I am not going to name because maybe if I don’t name the company then Melissa won’t be mad that I’m writing this post.

Yesterday, Melissa packed up her life. She is great at packing. She changes countries every year, so Wisconsin to Texas is nothing for her. It’s not a move so much as a hop, skip, and jump. She wheels and deals frequent flier miles until she lines up her international miles to coincide with her local miles and her premier flier perks and soon she’s flying six suitcases for free with a seat upgrade to boot.

She throws out fashion souvenirs of Milan and Hong Kong and Shanghai and other places where the clothes don’t work on a farm, or in Austin, Texas.

As she moves her clothes out of the cupboard, I move my books back in.

I’m a grouch that Melissa is moving, but I am happy to have a place for my books. I lift up the old wooden door we used as a makeshift desk, and I forgot she raised the door to the right height by putting books underneath.

I find Picture This, by Molly Bang. It is one of my favorite books ever. Every designer in the world should read this book, and anyone who wants to give criticism to designers should read this book. In fact—Wait. I have an idea. Designers: pass this book out to everyone you have to work with, and tell them, “You cannot give me input about my design until you have read this book.” This is a great strategy because smart people will read the book and understand that design is way too hard for them to be telling you they don’t like the color blue. And dumb people mostly don’t read books so most of them won’t read the book and you will never have to talk to them.

Melissa is packing and I am unpacking and we are both sad. I will miss Melissa and anyway, I really think if the Farmer was going to cheat, he’d find someone to cheat with without my help. It’s not like men are dependent on their wives supplying resources for cheating. (If they were though, wouldn’t it be a great world?)

Melissa wants me to understand why she is leaving. I don’t want to be overbearing. I know the kinds of parents who want you to do what they want you to do. I think half of my coaching business is giving people in their 20s confidence to choose a life that their parents think is totally stupid. I don’t want to play the role of that limiting parental influence.

Then the phone rings, and I hear Melissa talking to her friend Missa. Melissa sounds like a college girl. She talks about things I don’t care about like Facebook status updates, straightening hair, new stores in Austin. I realize that Melissa is a twentysomething who has adjusted to my family life in order to get stability. But now she needs to go back to her twentysomething life.

Of course I think the choices she is making are lame. Everyone thought the choices I made in my twenties were lame. I stuck with them, but I wish I had had more confidence doing that. I wish I had believed more in my ability to steer my own life.

So I hug Melissa. I don’t like touching anyone besides the Farmer and my kids, so it’s a big deal that I’m hugging Melissa. She knows that. I tell her, “You need to go be a 27-year-old, right? That’s what you’re doing. I get it.”

The next day, we try the berries again. It’s absurd that we are doing it the day she is leaving. But I think it’s normal to cope with a very sad goodbye by ignoring it. Besides, the berries are only ripe for a few days each summer and I don’t want to miss them.

We go back to where we were the day before. We each go to places we didn’t go yesterday, and I find myself watching everyone else find berries that the other people missed. I want to be the person who can see answers from many perspectives.

I want to help people by seeing past my own experience to a place where the number-one value is people making their own decisions—good or bad. I want to help my children do that, too. But I think the first step is for me to work on helping myself to have faith in my ability to make my own decisions. 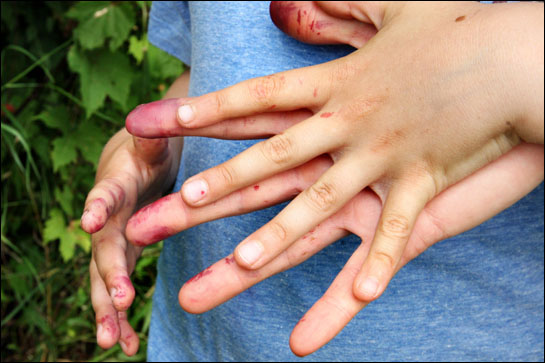