I miss her taking pictures all the time. For example this self-portrait. Which she took 500 versions of. She wore the same clothes for a week— something that feels natural to do on a farm—and even though the paint is red and her clothes are pink, she magically matches my bathroom walls.

She left me with a folder of 50 photos for my blog. That’s a good gift. And she left my kids with the feeling that they made a new friend. 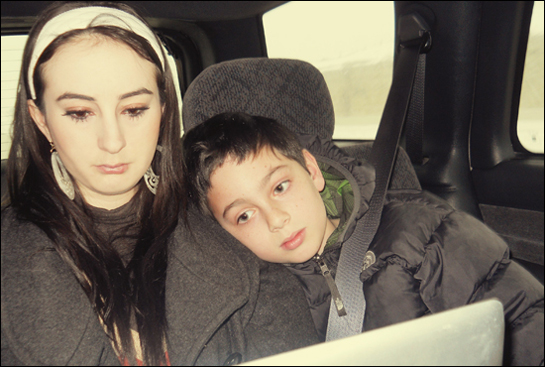 I took this photo from the front seat. I told her maybe I didn’t like it. She looks sad. But she said, “We were sad. It’s a sad movie. The Dalmatians are being turned into coats!”

I wish I were gay, and attracted to people less than half my height, because then I could marry Melissa and she’d never leave. But she cannot live here. She needs to get married. She wants kids. And I don’t think she will find a husband on our farm, although I have to say our plumber is smart and sweet and hot in a country-boy kind of way. But he’s married.

Now that she’s gone, I’m sort of sinking into a depression. And lately, all my depressions look like this: The farmer does not pay enough attention to me. Blah. And my career does not seem to have a rocket ship trajectory. Blah.

But if career paths are really learning paths rather than earning paths, then my career is about learning to make connections. And maybe I do have a rocket.

1. Watch for personal patterns in moments of failure and success.

I have built three Internet companies based on communities of math teachers, then city managers, and finally young professionals. And I have built a writing career on documenting how I sort out the rules of engagement in life.

You can see how far I’ve come because my first big break in writing was when my hypertext (which is here) got me lecture gigs at Brown University and the University of Paris. Publisher’s Weekly bitched about my inability to be emotionally connected in my writing, but I got into graduate school at Boston University for my cunning ability to describe really bad sex.

I wonder if my editor will cut that part.

The thing about writing for an editor is that you write for one person. Did you ever get coached for speaking? I did — the TAI Group. I love them. They gave me incredible coaching and if I had to get a job that was commission-based and made me scared my kids would starve if I couldn’t make a sale, I would choose to sell speaking coaching from the TAI Group.

Really. This works. It’s super hard to do because our intuition is to ditch someone before we make a connection because it’s so scary in a speech to try so hard, in front of everyone.

If I write for him, with him in mind, then I connect with him really well, and, in turn, connect with you—just like in the speech.

Right now, I am stressing because my editor might cut all this stuff. About connection. So I have to write more.

3. Have patience while you look for an engagement point.

I’m becoming fascinated with how people make connections. So much of it, I think, is that you assume people will be interesting. Moira Gunn has a show on NPR called TechNation where she interviews scientists about topics she knows nothing about. She is renowned for knowing how to start a conversation with anyone.

Gunn gently steers the person to a place where they can make a connection. One of Gunn’s favorite interviews was with a food safety researcher who ended up talking about mussels. He told her that you are only supposed to eat them in months that have Rs in them, because in June, July and August the water is warm and bacteria levels go up, and mussels are basically filters.

Melissa met me by stalking me at a conference where I was speaking. I thought I was avoiding her, but she waited until I was clearly lost trying to find the room where I was to speak. She said, “You look lost. I can get you to your room.”

4. Say something simple and true.

People who say they are shy are usually not shy, but rather, they are under the impression that they have to say something genius and complicated and impressive as an opener, according to Bernardo Carducci from the Shyness Research Institute. But in fact, people like openings that are simple and true—these openers have plenty emotional and intellectual space to join in.

I’m smitten with Joel Johnson’s bio page. Look at it. He’s done incredible stuff, but he uses the page to create space for the reader to join him—in an e.e. cummings sort of way. There is something about the combination of lists of achievements and fully-formed sentences that pushes a reader away. Roland Barthes writes about how the connection between the reader and the writer is in the white spaces on the page, not the text. If this is true, which I think it is, then Joel has one of the best bios for making real connections that I’ve ever read.

He makes me want to change my bio, but honestly, I’m scared to make my bio more about connecting and less about me because I want to make sure people know how great I am. It’s a personal failing.

Note, that last line is not something simple and true. It is perhaps a partial-truth.

Anything you want to be good at requires that you do it over and over again, and Carducci says that creating a good opener for conversation is no exception. Here’s his book, for those of you who are operating under the delusion that reading about something is a replacement for real-life practice.