Remember the donkey in the last post? Well, here’s the story of the donkey. The farmer bought it, but he doesn’t know very much about donkeys, except “Horses need to be ridden,” he said. About ten thousand times. At first, she did not cooperate. Maybe she saw me as an intrusion on her relationship with the farmer.

Which at first was funny. 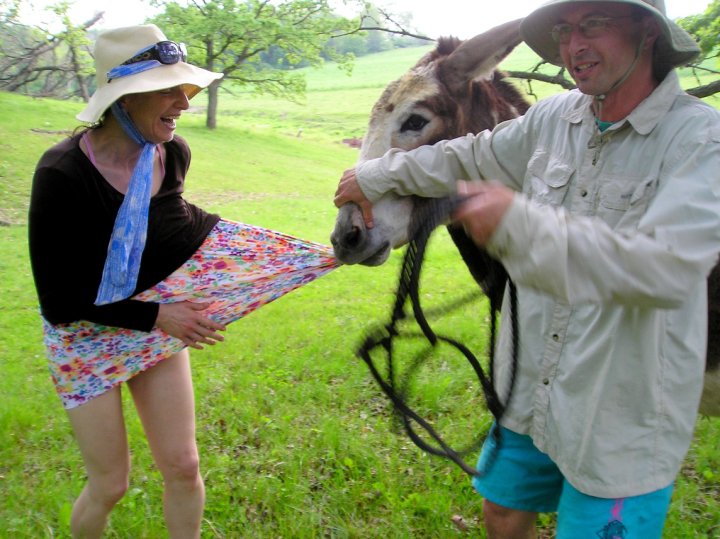 And the farmer started getting angry. 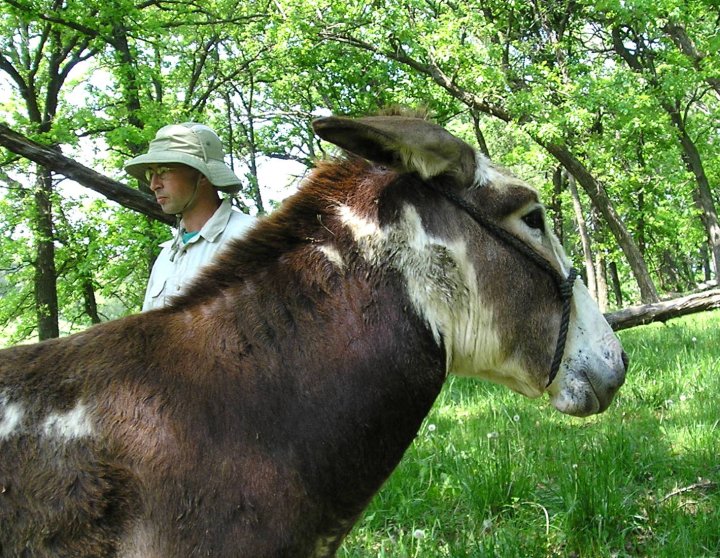 So I tried my own, less authoritative way of dealing with her. I’d sneak onto her in the pasture when the farmer was doing farmer things in the crop fields. Once we were alone, I fell in love with her.

She hangs out with the girl cattle. She is sort of the leader of the girls. They do whatever she tells them and she pushes them around a little if they forget to acknowledge that she is in charge. It’s fun to ride her in the middle of 50 cows. I feel like I’m a cowboy.

I found myself moving her around by strategic pets, and, when desperate, allowing little nips to my rain boots, which she loves to munch.

Then I told the farmer to stop giving me help with her. I told him I am gifted with donkeys and he is not.

Then she got splashed with water and darted and I fell off of her.

I got a sprained neck and a concussion. And I got lots of narcotics to deal with the pain.

When I got home from the hospital, the farmer was trying to stabilize things at home. The farmer always responds to my instability with more stability. He expressed frustration that I still had not dealt with the fact that our windows are painted shut.

I said, “Oh, I’ve just been hitting them on the side a little and they loosen up.” Then I kicked the side of the window where the wood part is. But I missed and put my foot through the window.

We both stood there.

Then I said, “Oh. Drat.” Because the farmer hates when I swear. Then I walked away.

The farmer said, “Hey, wait. Aren’t you going to clean it up?”

“There’s glass all over the floor.”

“The kids will step on it.”

“They’ll walk around it.”

“No. This is crazy. Clean up the glass.”

He wrestled the car key from me. He said, “You’re on narcotics. You’re crazy. You can’t get in the car.”

So I started walking. I was walking nowhere because, there is nowhere to walk unless you’re doing Ironman distances. Everyone in a car that passed me waved to me. A stray dog followed me for about an hour. Bees followed me for a while, too, in a nice, girl-in-a-Disney-movie kind of way.

When it started to get dark, about four hours later, I was completely lost, but somehow I was in the city of Darlington (which is two blocks long) so I asked someone where the police station is, and I walked there.

I said, “Hi. I have been walking and I’m lost. Do you think you could give me directions home?”

This set off about ten thousand alarms in the police station:

1. No one walks anywhere.

2. No one gets lost in Darlington.

3. The social fabric of a small town is tight—people do not rely on the police for anything. They rely on their families and their gun collection.

“Do you live here? Are you new to town? What’s your name?”

This is the type of harmless questioning I got. But the “what’s your name” one — that was bad. Because the police have a record of me having two, completely different names. This is not normal for Darlington, except if you’re a train robber from the 1880’s.

I said, “I’m not usually like this. I have a company in Madison. I am a commentator on CNN. Google me.”

So the dispatcher called Michael, the deputy sheriff and sole-authorized-Internet-user at the station. He googled me and then sat down next to me to try to work things out.

But before he could really do anything, the dispatcher or whatever she is discovered there was a warrant out for my arrest.

So then they put me in jail. Michael apologized and offered to put me in some separate, carpeted cubicle that locks instead of the regular jail. It was sort of the like the Lafayette County white-collar crime unit.

Things did not go well in my cubicle. After the narcotics started wearing off, I lay down on the floor. The maybe-dispatcher opened the door and said, “What are you doing?”

“I’m on a lot of narcotics and they’re running out. I need more.”

Michael came to my cubicle and started to work things out again. For a second I thought I would marry him if I were not already married to someone who had my kids and my car keys and all the fruits of my interior decorating skills.

I learned from Michael that I forgot to do a bi-monthly financial disclosure to my ex-husband’s divorce lawyer who I have decided not to pay until I have cleaned up all our IRS troubles from when we lived in NYC and cleared out our 401K’s to pay for medical expenses without understanding the (insane) tax ramifications. I have written before that I am very bad with paper work. Sometimes, if there is a legal thing that I can’t figure out, I just don’t. I make mistakes.

I did not explain any of this to the maybe-dispatcher as I filled out more paperwork.

I asked why. She said, “You have two names, you claim you’re a millionaire, and you’re lying on the floor taking drugs.”

Darlington is a touchy place. I am the only blogger here. Of course. And maybe everyone is friends with the maybe-dispatcher and they will say, “She didn’t say that!” So, okay, maybe she didn’t say that, but she said something like that. I’m getting the gist of it. And if you want a complete transcript of daily life in Darlington, Wisconsin, get your own blog.

She didn’t care. She faxed my forms to some magical central repository of paperwork for people who have warrants out for their arrest. Then Michael drove me home.

He was so nice.

The next day he read my blog and wrote such a nice email about what he got from reading it. I told myself that people in Darlington will love my blog and I will be popular and loved and I will live happily ever after.

The next day he brought the farmer a copy of The Five People You Meet in Heaven and said maybe it will help the farmer deal with me. I told myself the farmer and I will stay married forever because we have such a good, small-town support system.

The next day Michael saw me driving. He came back to the house. He said, “You can’t drive. You don’t have a driver’s license.”

I said, “Yeah. I know. I didn’t need one when I lived in New York City because there are subways. And when I moved to Madison, I couldn’t figure out how to get a driver’s license. I mean, I’ve tried a few times and I couldn’t do it. ”

“Well, it’s very complicated. Did you read my post about the DMV?”

“You have to have a license.”

“Well, it’s not technically illegal to drive without a license in Wisconsin. I’ve been pulled over a lot in Madison and they just give me a $200 ticket and let me go.”

“We’re going to give you a $200 ticket every time you drive your car in Darlington.”

When he said that, my stomach tightened and I felt sick. I started wishing I were still on narcotics because that might make everything better.

So now is coming the advice part of this post. I mean, not that there isn’t a lot of advice here already, like, don’t ride a donkey near spraying water, and if you want a conversation to disappear for a little while, take narcotics.

But really, this story is about damage control. The donkey story happened at the beginning of the summer, when I had just moved to the farm, and the inability to drive put me over the edge. I locked myself in the pantry and called my friend Sharon and cried in the dark, on the floor, next to flour and sugar until my eyes were too puffy to tear anymore.

Then, here’s what I did to start fixing things. And these are actually tactics that have fixed a lot of things in my life:

The driver turned out to be more than a driver. She is also a good guide for me for small-town life because she raised two kids here. For example, she can decipher the cryptic insert that appears to be from the school system offering after-school care, but that’s actually from a church.

2. Be honest. The farmer was aghast about the warrant. “This will be in the newspaper on Monday,” he said. My first instinct was that he was joking. But he wasn’t. The contractors mentioned it while they were repainting our windows. I told them the story. They did not laugh, and I thought maybe I should not have told the story.

But you know what? I just read a fun article about the New York Jets, and their owner, Woody Johnson. He used to be really press-shy and then realized that you can’t be press-shy if you own a team in the most vociferous media market in the universe. So now he says anything he wants. (Quote from him: “People say we talk too much. Fine. Whatever. Good.”) And when a reporter asked him about getting into trouble, Johnson said, “New York fans don’t care if you make mistakes, if you’re authentic. Well, they don’t want too many mistakes.”

I think that’s true for everyone, not just New York fans. So in Darlington, I have to just be myself. And not hide stuff, and I think it’s really hard to hate someone who is being their true self and trying, at the same time, to be their best self, authentically.

3. Get back on the horse. Or the donkey. Or anything where you failed. So I got back on, and next time you hear about me riding, I’m going to have my horse.

What are we working for, really?

4 Twitter tips no one will give you
Scroll to top