I’ve been hiding so much that the only way I could sort it out was with a list; a list of things I thought were too awful to write.

1. College applications were hell. Like many delusional parents, it took my kid applying to Harvard early decision to make me realize he wouldn’t be going there. He didn’t want to leave the Boston area, and I didn’t want him to go into debt. On good days I worried he wouldn’t get in anywhere. On bad days I imagined he’d never leave home and we’d live like we’re at the Bates Motel.  But he got into Northeastern University’s honors program with a full scholarship. The campus is three blocks from our apartment. Wondering how much four years would cost without a full scholarship? $294,000. Wondering if I’ll show up randomly at his dorm? He warned me that he’ll pretend he doesn’t know me.

2. Cassie stole $20,000 from me. People have been calling her a scam artist for the whole ten years we’ve been friends. But she’s she helped me with the backend of my site and I helped her with SEO so Cassie Boorn is a scam artist didn’t rank high in Google. Recently she changed my payments system and I felt like I was losing money. Grace investigated and showed me how Cassie was stealing money with invoices. I didn’t believe it. When I confronted Cassie she told me she meant to put the money back, but then the amount got too high. Wondering how it feels to get scammed? I probably get scammed all the time, but now it feels like losing a friend.

3. My younger son got a traumatic brain injury. A year ago the Uber driver announced he was going to run a red light. My son’s head broke the side window. I hated myself that I let him get in an Uber alone. I hated myself that I let him get in a car with no airbags. At some point, it became clear that his hearing will never fully recover. My son used to practice cello four hours a day and piano three hours. For most of last year, he slept about 16 hours a day (common for traumatic brain injury) and practiced cello when he was awake (with earplugs). The neurologist told us this type of brain injury often leads to hearing loss by middle age. The best data on recovery was from live movies of my son’s eyes reacting to pain in his ears. I told myself I’ll deal with that later. I had to deal with college applications. I had to deal with Cassie stealing money. Then it was the one-year anniversary of the car crash and I told my year-long writing course I needed a break. I said we’ll start up again in May. Everyone retaking the course was kind and supportive – in hindsight they talk with me so much, they probably knew most of what was going on.

Maybe it was I who didn’t know what was going on. When I took a break from the course I didn’t realize I would take a break from writing. For the past four months, I’ve felt like I’m standing in the reflections of Dan Graham’s Crazy Spheroid and I don’t know if I’m recharging or disappearing. I tell everyone that the writing course creates a group atmosphere that makes you want to write. I didn’t appreciate how true that is for me as well, because here I am, about to start a new session, and I’m writing again.

It’s too hard to write all alone. A writing group doesn’t force you to write. But I think a writing group shows you how to force yourself to write. As someone who has been writing professionally for 20 years, I can tell you that the secret to writing consistently is finding tricks to force yourself to write. I have had to change up my tricks when their power wears off. The writing course has been motivational in such a magical way. Thank goodness I’m starting it again in May.

Wait. One more picture. I thought I would use this picture to tell you that I also spent the last four months throwing out stuff that I shouldn’t be throwing out, like my table made from a bowling alley floor. But actually, this picture is perfect for telling you thank you for getting to the bottom of my list. It’s easier knowing someone is here with me. How to tell if your friends have Aspergers. The Christmas card edition 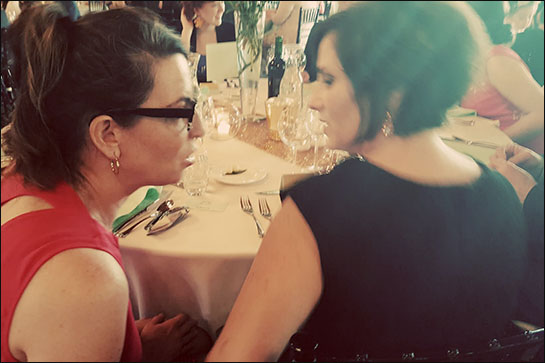