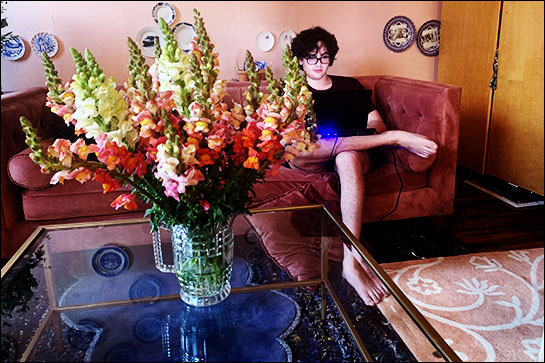 I am in between one son practicing his cello and one son writing his college essays. After ten years of homeschooling while being the breadwinner, my parent intuition tells me one kid is only going through the motions.

On a good day I could say, “What are you doing?”

Rather than answer, “Wasting my life in a state of inattentiveness and fooling no one,” the checked-out boy would visibly check back in.

Today is not a good day. The older son thinks nothing in his whole life has transformed him so he cannot write an essay about personal transformation.

Maybe I should prepare him for the sink-or-swim terror of adult life and tell him, “Ok, then don’t apply to college.” I don’t say that. I’m a helicopter parent or a tiger parent or a Jewish mother. Whatever I am, I’ll throw him a life vest til the day I die.

So I throw one now. Though maybe it doesn’t land as softly as a life vest, because I scream: “We just read five sample essays that got kids into Harvard and they were the most non-transformative transformative moments ever! That girl wrote about finding the singular verb in a Latin sentence! Have you not done anything as transformative as that? What the actual fuck?!?!”

“That sounds transformative. You should write about it.”

Really I want to write it. I want to write the whole essay. Thank goodness upstanding citizens who had no real reason to break the law for their children are now in prison for cheating on college applications. This keeps me in check. I want more than anything to be a good parent and prison is structured to destroy families.

Aspiring to parenting greatness means stopping the flow of my own writing to say to my son “Get a metronome.”

He says he doesn’t need one. He says, “I’m practicing shifts.”

“Then use the tuner.”

He turns on the metronome. I don’t play an instrument and I can’t read music but I know cello practice is probably pointless if there is not a metronome or tuner involved.

The best parents lead disjointed lives. Because the best kids are independent enough to give their parents just enough time to think: Why am I just sitting here? What the hell am I doing with my life? And then just as you’re standing up to call a friend and launch a publishing company (if you’re rich) or get a job (since they’re all from home now) your kid says, Mom look what I made. Or, I’m playing Lalo all the way through.

The latter is the teenager way of saying Mom look at this. Which I do. I’m sitting in between the boys, ready for a concert at any moment. I put my phone down to listen, because I heard Cat’s in the Cradle too many times to risk him not picking up his phone when he’s all grown up and I see him only on Mother’s Day and Passover.

Back to the college essay that I can’t write. I buy flowers at Global Rose because they are wholesale and they send way too many for any one home. I like way too many. Also before we go one step further this is a great advertisement for Global Rose. And they didn’t pay for it, but they could show gratitude by sending me peonies. I want the coral ones for $257. Thank you.

I spend more money than you would think is reasonable for flowers. They make me really happy. I like rearranging them to put different colors near each other. I like having many vases full of flowers and seeing how they make a space feel different.

If I have lots of flowers then when the boys knock over a vase I don’t mind. I have extra flowers everywhere. That’s transformative right there: with enough flowers even the most high strung mom can brush off a broken vase.

Global Rose can have that tagline in exchange for another round of snapdragons.

Instead, I have just enough time to string ideas together. I fear that string is the equivalent of a child’s art project, macaroni pieces sliding back and forth on a piece of yarn around my neck. But I always hope they look like rare gems, sparkling in a way that makes me charm.

What a Black person thinks when they read this blog