The first round of auditions for Juilliard’s pre-college program is by video. From December to March my son practiced for three hours a day to prepare. At the end of March we recorded him playing Cello Concerto No. 1 in A minor, Op. 33, by Saint-Saëns, and we sent it off to Juilliard.

The results of the first round came quickly. He made the cut.

The art of practicing is finding a process for repetition without boredom.

When he told his teacher he was bored, she told him boredom in practice comes from a lack of engagement. She showed him how to recognize disengagement. Then she taught him to look more closely at each note and listen more deeply with his ears and his heart.

During these insane lessons my son spent one hour on five notes; the more we worked on the art of practicing the more I saw that practice is a method to do anything ambitious and difficult. Through hard work, he learned to create a system and process instead of just focusing on the goal itself.

The best processes speed up the cycle of frustration and recovery.

The first 3,000 hours of cello lessons are learning how to recognize a wrong note and stop and fix it. And now he has to learn how to recover from failure, very quickly, so when he plays a wrong note in competition he can move on immediately. Even though I don’t know if he’s sharp or flat, I do know that if he’s sulking about making a mistake—he can’t focus on not making the mistake.

Resilience is about being able to get back up on your feet on your own, so I teach him not to rely on other people to prop him up. “You don’t need a teacher to tell you how great you are. Tell that to yourself. Right now.”

It’s a hard concept. On different days I tell it to him differently. And then I watch hopefully, because I tell that to people I coach all the time and I know it’s hard, even for adults.

Last Thursday was the big day.

My son is on a mission. I am on a mission, too. I want to hug him and high-five him and tell him he blows me away with his hard work. But I don’t want to embarrass him, so I take pictures instead. Until he says, “Mom, put your phone down! You’re embarrassing me.” It’s impossible to put all your energy into something really difficult if everything is riding on the result. The people who are the best at reaching big goals have an obsessive drive toward the goal, but also, they are able to break down the process of meeting the goal into tiny, bite-sized pieces and then take pleasure in completing each part.

When someone is unable to relish the small steps, they just stop. Because process starts to seem hopeless if you constantly focus on the end. You have to have a proclivity for hard work (which might be as crucial and inheritable as talent) combined with the ability to take joy in the process itself.

He practices facing the accompanist so they can see how each will play particular parts. 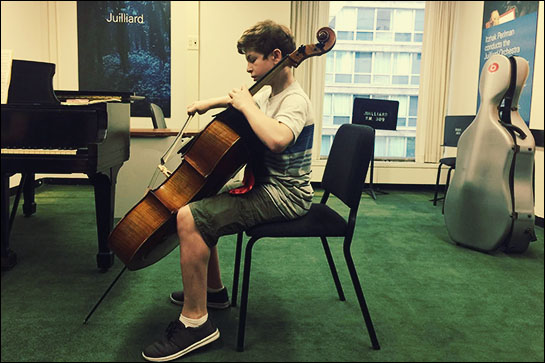 Then he turns his back to her because that’s how it’ll be at the audition. She watches his arm and his head for cues. They don’t have to talk. They both just know that this is what will happen.

He has been eating carefully and sleeping carefully for a week. He reminds me of how I used to work to peak for the beach volleyball season and recover over the winter. And he reminds me of everyone who has ever worked hard for something that is a long shot: He is nervous. No process works without a coach who deeply understands the goal.

The teacher has been training him for nerves as well. We scheduled five competitions prior to this audition so he would get used to playing this concerto under pressure. People perform better—in any circumstance—with a little bit of stress. Top performers self-regulate to generate the optimal amount of stress.

The teacher had him run up and down our street to get his heart rate up and then had him sit down to play his piece while his pulse was still racing. And the other day when he came home from a basketball game he wiped his hands all over his face and played his piece with sweaty palms.

Now he gets dressed and he waits. I can’t read music and I can’t tell what’s in tune, but I do know what it’s like to have focus, so we have practiced waiting. In this outfit. I made him stand by our front door, where there is nothing to look at. And I didn’t tell him how long he’d be waiting. And he practiced controlling his thoughts and his nerves.

Finally, here we are, and he looks so grown up to me. The door opens. He goes into the room, and he plays.

I wait. The kids in the other practice rooms are too loud for me to hear him. So I just think good thoughts. We won’t know the results for another two weeks. But we already know that he worked incredibly hard and he grew from each step of preparation.

So he already won. Because now that he’s done this for cello, he can do it for any part of his life in the future.

Update: He got in!

Commencement speeches are garbage. College graduation is terrifying. My startup is imploding. I mean pivoting.
Scroll to top