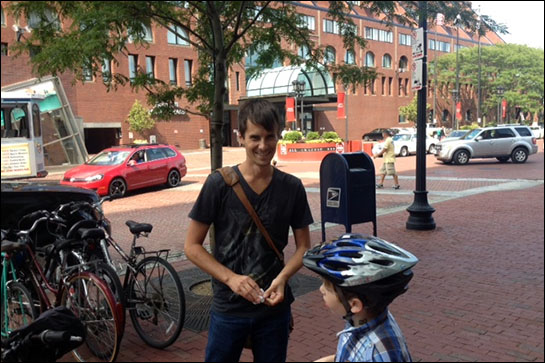 I took my kids to a four-day music workshop in Boston. The kids play fiddle music at home and the workshop is with a fiddle player they love: Brian Wicklund. But the workshop was terrible, so we quit the first day.

Now we are tourists in Boston. So I go through my list of people who I know who I would want to hang out with in Boston, and the list is really long. If I were here with no kids.

I call Ryan Paugh. I started Brazen Careerist with him. And one of the notable things about my relationship with him is that he was fresh out of college when I met him, and I had a falling-apart marriage, and he used to babysit my kids while I went to meetings with investors.

So when I tell the kids we are going to see Ryan Paugh, they high-five each other and say, “Oh yeah! This is the best music workshop ever!”

1. Your network is people who will really go to bat for you.
We have a bit of a cash problem here in Boston. I lost my ATM card in Illinois, and I couldn’t get a replacement, becuase you can’t get a replacement if you’re out of state. So they had to mail it to me, so I just took out $1000 cash. I thought I would never need more than that at a music workshop.

But I forgot that we don’t have luggage. I know that’s a big thing to forget, but we travel so much that we were already packed from going to cello lessons in Chicago the week before. So on the way to the Milwaukee airport I stopped and bought luggage, with cash.

Then we got to Boston and I realized that I should have rented a car, but now I couldn’t, because I don’t have a credit card. So we took cabs. That was another chunk of money. And then we stopped at Whole Foods to buy gluten free food for the week. And you can’t walk into Whole Foods without dropping $200.

All this would have been fine if we had just gone to the music workshop. I mean, not fine, but manageable. But it became unmanageable when we quit the workshop.

So I decided that we will take a cab from Newton to a Chase branch in Boston and withdraw more money. I use the Chase iPhone app to locate a Chase. We take a $60 cab ride to the address. It turns out that it’s not a bank branch. It’s corporate offices. There are no Chase branches in Boston. Can the person who oversees the Chase iPhone app please identify himself so I can kill him?

The kids are in the cab, playing video games, as if nothing is wrong, and the cab fare is getting so high that I don’t have cash to pay for it. I realize that I have an $8000 check in my wallet, though. So I can deposit it into my Wells Fargo account and then beg them to let me withdraw money right away.

But there is no Wells Fargo in Boston either.

I call Melissa because she’s the only person who understands how I can be so incompetent with money. Everyone else will say to me,  “Stop being so irresponsible!” “Just do better!” “Hire someone to help you!” Melissa understands why none of this advice is useful.

Melissa opened an account for me at Wells Fargo because she banks at Wells Fargo so every time I get into trouble, she can access my account and fix it. This time, she deposits cash into my account from hers and it’s available right away.

Almost right away. We sit in the cab, running up the meter, waiting for the cash to be available so I can use my Wells Fargo card.

So far the kids think Boston is great. Video games all day long.

2. Work hard on a few workplace friendships. You’ll leverage them later.
Ryan meets us at a bike rental place downtown. The kids ride their bikes around in the park while I talk to Ryan on the pier. Part of the deal, when I founded Brazen Careerist with him, is that he moved to Madison. It’s way more fun to do a company with people who are with you. And I wanted fun.

But Madison is a very small city to grow a big career, so he went to Boston and started YEC. That stands for Young Entrepreneur Council. That company is a great example of how Ryan can create value out of air. It’s a group of young CEOs who have revenue of a few million. Or something like that. There’s a cutoff. And it’s a way for them all to help each other and get to know each other.

Ryan has done a great job of riding the trend toward private networks. He tells me about how people want to apply to join, but they can’t even fill out an application unless they have a sponsor from the group. And then they get rejected for not having enough revenue. He tells me about an app YEC is developing to help members find people to meet up with when they travel.

1. Ryan is a good person for me to know because I can get someone into YEC and I will look very connected.

2. It’s amazing to me that entrepreneurs today are focused on how much revenue they have instead of how much money they’ve raised. That’s a big shift in the last ten years.

I get upset with myself that Ryan has already built a new company and I am struggling to make time to write. I hate that he has an app to find cool people to meet up with if you don’t have kids.

We leave Ryan to go work at his incubator space, and we ride bikes up the Charles River. But there is a detour, and we actually ride bikes at one of the biggest traffic interchanges in Boston, and I cross a highway against the light, and my younger son screams at me to pay attention, and I want to say, “I can’t pay attention because we are lost and I can’t read a map and my phone needs charging.” But I just move back to the curb.

The kids are hungry. I have money in Wells Fargo, but I’m scared to spend it. I just like having it there. So I tell them they have to drink tap water. But they are scared to drink tap water because I don’t let them drink it on the farm because I think the laws in Wisconsin are too lenient with farmers dumping nitrates into their land.

The kids throw fits about buying bottled water. Which turn into fits about Gatorade. Which resolves at six Sponge Bob popsicles. 3. Network with people who inspire you, but can’t necessarily get you work.
The next day the kids won’t leave the hotel. It’s hard to go from life on a farm to riding bikes on city streets. So I say fine.

I email a friend from graduate school, John McCoy, to come visit me at the hotel. He knows the version of me who wore the same clothes every day and turned in story after story about my endlessly incompetent sex-life for credit toward a master’s degree I never got.

John has three graduate degrees, which is pretty common in Boston. He runs the Boston College art museum. He’d say, “Well, I don’t actually run it.” But I can’t remember his title, and anyway, I’m great at inflating peoples’ titles without lying, so I think this is a fair example of that. He runs enough of it to say “runs.”

We talk about how Boston College exhibited a Caravaggio unearthed in Ireland. Ireland doesn’t know enough to forbid art like that to leave the country, and also, it was found at some Jesuit place, and Boston College is Jesuit-run, and the Jesuits stick together.

That enabled John to get a John Singer Sargent exhibit. “The fabric is abstract,” he says. And I know what he means. I have Seargant paintings in my head. But I never realized that’s what I was seeing in the painting.

He talks more about art and I panic that I am not talking to intellectuals enough. I am in Farmland. I am with kids.

John’s wife is at Boston College. He says she has become the Queen of Plato.

I say: “Really? I thought Susan Okin is Queen of Plato.” Now I worry that everything I learned in college is irrelevant; I can’t even hold my own in the world of feminist deconstruction of The Republic.

Marina McCoy. That’s John’s wife. Her next book is about how virtue and vulnerability go together.  “Remember the beginning of the Iliad?”

I say yes, because I remember not understanding it.

He says, “Remember how Aphrodite gets struck by an arrow and Zeus says, who cares, you’ll never die anyway? And then when people get killed, thoughout the book, Homer makes a big deal about it, and goes back to the person’s childhood and through their life. It’s because there is no virtue in living unless that life is vulnerable.”

I immediately see a career parallel, of course. You cannot connect with people if you cannot show them where you’re weak. People don’t have a capacity to care about someone who is not vulnerable. So there is no point in networking with people you won’t connect enough with to show a weak side of yourself.

Keith Ferrazzi says this well in Never Eat Alone. But I think Marina says it better in her published paper, which of course I haven’t read. But that’s why I don’t really fit in Boston: I want all the interesting theories without the work of sitting in school slogging through difficult reading.

4. Helping other people is a huge part of networking.
The next day the kids don’t want to leave the hotel room. They practice cello and violin in order to see one more episode of The Regular Show. Which I love, by the way. I love how silly it is. And random. Here’s a good episode.

Then I say the kids have to leave the room, so they swim at the pool, which is swanky and looks more like a bar with a pool than a pool with a bar. The only shady spot is next to the lifeguard, so I sit there and read Garden & Gun, which really is surprisingly high brow. It’s grit and snobbery of the South rolled up into one, overly self-conscious magazine.

My kids wrestle in the pool and look as if they are drowning, but the lifeguard has seen them swim, so she’s watching unfazed. I watch the men at the bar watch her watching. It’s absurd how many men have come over to talk with her. She is dressed in shorts and a t-shirt instead of a bathing suit, her hair is in a pony tail, and she reads Chelsea Handler when the kids take a break.

One guy will not leave her alone, and I can see she’s frustrated. When he finally leaves, I say, “The men are just like that in corporate jobs, too.”

“Yeah,” I say. “I’m telling you this because I used to work at the beach and I was blown away by how much the men bugged me. But when I got older and had a corporate job I realized that dealing with the men was good training for my career because it never stops.”

We talked about her job. Her college life. What she wants to do.

I gave her my email address on a pool-soaked bar receipt. That’s good networking.